Today, as hundreds of thousands of men and women gather around the country to march for equality and inclusivity, I wanted to re-post an article I wrote last year for Women’s Equality Day. While I do not agree with some of the platforms of this year’s “Women’s March on Washington,” I do agree with many of them and so, though my conscience wouldn’t allow me to march on the street, today I am marching in my heart. These words are the giant poster I carry with me. 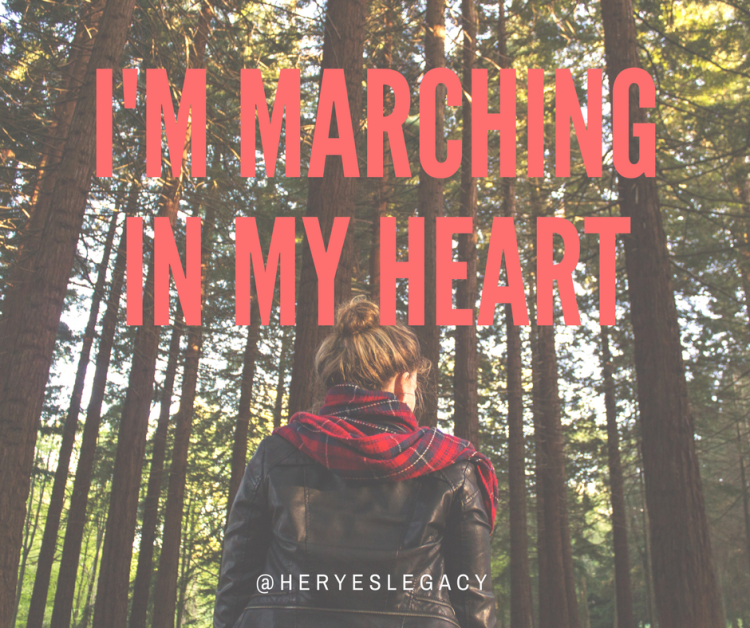 July 19th – 20th, 1848, in Seneca Falls, New York, men and women gathered for what is now known as the first women’s rights convention. The gathering was organized and hosted by a group of Quaker women with the goal of discussing “the social, civil, and religious condition and rights of woman.” There were 300 in attendance.

During the convention, a document was written, debated over, edited, and ultimately made available, for those who were in agreement, to sign. Of the 300 convention attendees, 100 signed their names to the document, with a majority of signatures belonging to women. This “Declaration of Sentiment” was then used in launching the women’s suffrage movement.

I have added the text of the “Declaration of Sentiment” to the bottom of this post and I’d like to ask you to take five minutes to really read it. I dare you not to tear up as you consider the heaviness of life carried by the authors as they penned each word.

Fast forward over 150 years and today is, “Women’s Equality Day.” The blood, sweat, and tears that so many brave women poured out as they fought for women’s rights in our country are to be remembered and honored.  Political affiliations aside, this year there was a woman running for the office of President of the United States. We’ve come a long way and that is worth celebrating.

My five-year-old just joined her first soccer team. Yesterday, as I was helping her take off her cleats, she very casually declared that when she is grown up, she is going to get a job as a coach and marry a man who will work from home and take care of their kids. I chuckled at her matter-of-fact statement and then considered her words. It is the legacy of women like Susan B. Anthony, Elizabeth Stanton, Lucretia Mott, and hundreds of others who paved the way for my daughter to think with such independence. She understands that her gender shouldn’t define her goals and dreams. I pray that one day, should she decide to marry, she will commit herself to a man who will see her not as his “sidekick,” but as his fellow warrior and teammate. I pray that her dad and I can continue to serve as an example for what a mutually submissive marriage can look like, to the glory of God.

Yes, there is still a glass ceiling. A thick one, actually. But if we continue to raise our daughters and sons up to know their identity in Christ, being confident of their value, owning their giftings and honoring the giftings of others,  we will see the cracks in the ceiling grow wider and longer.

As daughters and sons of the King, we have a common mission. We are to partner together, as co-heirs, in advancing the Kingdom of God.

One of my favorite authors, Sarah Bessey, states in her book, Jesus Feminist, “Patriarchy isn’t the dream of the Kingdom of God, and so we can loosen our grip to this old culturally conditioned way of thinking…Patriarchy will not allow us to participate in the restorative movement of the Spirit for women and men’s intended alliance.”

Let’s celebrate how far we’ve come. Let us also advocate for our sisters around the world, still trapped under laws and cultural norms of genital mutilation and “honor” killings and lack of education due to gender. Pay attention to the reports of human trafficking and stay up to date on how you can pray and be a support to those working to save the lives of so many women caught in the ugliness. Use your right to vote. Run for office. March.

“You are the ones chosen by God,

chosen for the high calling of priestly work,

chosen to be a holy people,

God’s instruments to do His work and speak out for Him,

from nothing to something, from rejected to accepted.”

The Declaration of Sentiment, 1848

“When, in the course of human events, it becomes necessary for one portion of the family of man to assume among the people of the earth a position different from that which they have hitherto occupied, but one to which the laws of nature and of nature’s God entitle them, a decent respect to the opinions of mankind requires that they should declare the causes that impel them to such a course.

We hold these truths to be self-evident: that all men and women are created equal; that they are endowed by their Creator with certain inalienable rights; that among these are life, liberty, and the pursuit of happiness; that to secure these rights governments are instituted, deriving their powers from the consent of the governed. Whenever any form of government becomes destructive of these rights, it is the right of those who suffer from it to refuse allegiance to it, and to insist upon the institution of a new government, laying its foundation on such principles, and organizing its powers in such form, as to them shall seem most likely to effect their safety and happiness.

Prudence, indeed, will dictate that governments long established should not be changed for light and transient causes; and accordingly all experience hath shown that mankind are more disposed to suffer, while evils are sufferable, than to right themselves by abolishing the forms to which they are accustomed, but when a long train of abuses and usurpations, pursuing invariably the same object, evinces a design to reduce them under absolute despotism, it is their duty to throw off such government, and to provide new guards for their future security. Such has been the patient sufferance of the women under this government, and such is now the necessity which constrains them to demand the equal station to which they are entitled.

The history of mankind is a history of repeated injuries and usurpation on the part of man toward woman, having in direct object the establishment of an absolute tyranny over her. To prove this, let facts be submitted to a candid world.

Now, in view of this entire disfranchisement of one-half the people of this country, their social and religious degradation—in view of the unjust laws above mentioned, and because women do feel themselves aggrieved, oppressed, and fraudulently deprived of their most sacred rights, we insist that they have immediate admission to all the rights and privileges which belong to them as citizens of these United States.

In entering upon the great work before us, we anticipate no small amount of misconception, misrepresentation, and ridicule; but we shall use every instrumentality within our power to effect our object. We shall employ agents, circulate tracts, petition the State and national Legislatures, and endeavor to enlist the pulpit and the press in our behalf. We hope this Convention will be followed by a series of Conventions, embracing every part of the country.”