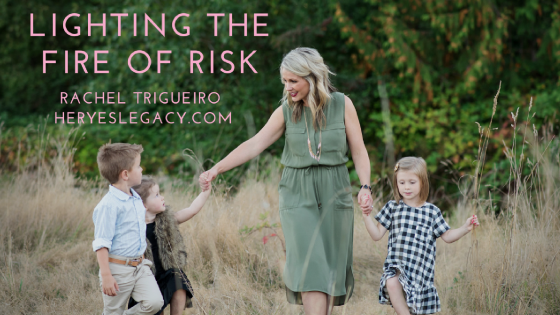 My friend Rachel is writing a legacy of “yes” by walking in faith through both the big, scary things, as well as the smaller, unnoticed things. I asked her to share a bit of what being a risk-taker looks like for her, in this season. I have read this post at least six times for my own personal benefit and encouragement and I am thrilled to get to pass it along to you. May your soul be strengthened and blessed by Rachel’s lovely and vulnerable words.

“Make your choice, adventurous Stranger,
Strike the bell and bide the danger,
Or wonder, till it drives you mad,
What would have followed if you had.”
― C.S. Lewis, The Magician’s Nephew

Uprooting our family from California to Seattle was just the beginning.  THIS WAS IT. We had made the (huuuuuge) decision to go, so now we were official RISK TAKERS.

So brave, so scared, so excited, so CRAZY.

In 30 days we made the decision to up and move our family: no job. no house. no plan. no community (except a few friends) AND 3 KIDS in tow. It felt pretty brave. Pretty risky (actually, felt like it couldn’t get much riskier). But it wasn’t until we moved that I learned the bravest moments were yet to come.

It wasn’t easy leaving, emotionally or practically. We were sad to leave our families-for our kids to leave their grandparents and cousins. And it was a lot of work with tiny children, a big house and A LOT of stuff in very little time (thank you, Lord for sisters who help get that crap done).

BUT, it was exciting. New. Thrilling. It was an ADVENTURE. And if you’re anything like me, you know exactly what I’m talking about because just hearing that word feeds your soul. There’s a desire deep down in you that craves adventure. Something new and something risky. And it’s those adrenaline-pumped emotions that make the tough ones easier. Saying good-bye is hard, but looking ahead to the unknown—endless possibilities—is life giving.

But all of that quiets down. The fanfare, the excitement, the mystery. Your people are no longer around. Eventually, those dreams, prayers, promises & hopes turn into waiting… Wondering. And you find yourself asking questions… END_OF_DOCUMENT_TOKEN_TO_BE_REPLACED

August 23, 2016.Reading time 11 minutes.
My friend, Michelle, is writing a beautiful “yes” legacy with her life. Watching her family’s story unfold has been inspiring. I asked Michelle to tell a bit of their journey and I am thrilled to share her words with you. I pray your soul is encouraged as you read of God’s faithfulness to my friend.

My name is Michelle and I am married to my high school sweetheart (cliche, I know). I feel very blessed to be able to say that we have been married for 15 years. We have six kids: 3 girls and 3 boys.

Our journey to walking with faith started five years ago. We were your typical American family: Craftsman style home, golden lab, and three little girls. We had toys to use on the weekends and lived life very comfortably. Then we read a book called “Crazy Love” by Francis Chan. This book changed our lives. END_OF_DOCUMENT_TOKEN_TO_BE_REPLACED 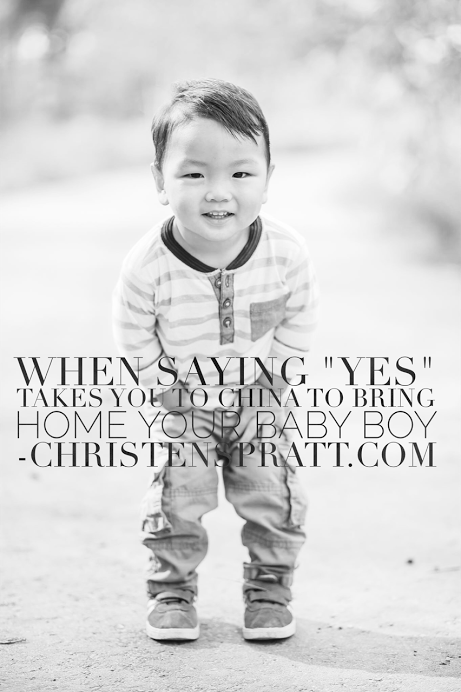 I am so grateful for the opportunity to share our adoption story on www.ChristenSpratt.com. Please read and share. God is good and life is hard. Reading stories of His faithfulness is good for our souls.

My adoption dream began around age seven after accidentally finding a picture in one of my mom’s Women’s Health books of a screaming lady with a baby coming out of her “lady parts.” I was traumatized and asked my mom what my options were. Sure I wanted to have kids someday but, dear Lord, not like that. She humored me and, after putting the book on a higher shelf, talked to me about adoption. A seed was planted in my little-girl-heart that day.

Fast forward about 20 years. I’m married to my high school sweet-heart with two young kiddos who entered this world just like that Women’s Health book said they would. My husband had finished school and was working as a Prosthetist, building legs and arms for amputees. We were settling into life nicely.

My longtime and very dear friend, Deborah, graciously agreed to be my first “guest contributor” and what she has to say will not disappoint. There is so much goodness to be had in listening to and learning from one another. Our stories are important and need to be shared. So, without further ado, please enjoy and be blessed by my friend’s tale of risk.

They say home is where the heart is. Sure, but I’ll tell you where home really is. It’s where you can wear your stretchy pants and make a mess and feel totally ok doing it. Home is where you feel comfortable and secure and you don’t have to worry about impressing people; that is home. I love home. I love the people in my home and I like the safety, security and familiarity of home. And I love when I have friends and family in my home because when my house is full, my heart is full. Ah home, what is there not to love? It’s hard to love when you have to move to a new city. It’s especially hard to love when you didn’t want to go to that city in the first place. And it’s always hard when you are in that new place and you have to make a new house, home.

I am not a risk taker. I like safe and familiar and I like to call it living wisely so I don’t have to face the reality that I’m a sissy.

The most adventurous thing I’ve ever done was work for a white water rafting company…as the nanny. I was not a river guide. I watched the owners kids. I was living in a tent for 4 days a week those two summers. It was pretty rough for this non-outdoorsy girl, but it hardly qualifies for risk and adventure.

It’s probably my fear of failure that drives my reluctance to step out, to try new things and to be the risk taker I admire in the women around me. Oh,perhaps it’s my worship of comfort? Either way, God in his goodness pushes me to places I would not willingly go on my own, for my good and his glory; and that is how I found myself as the new girl in town a few years ago.